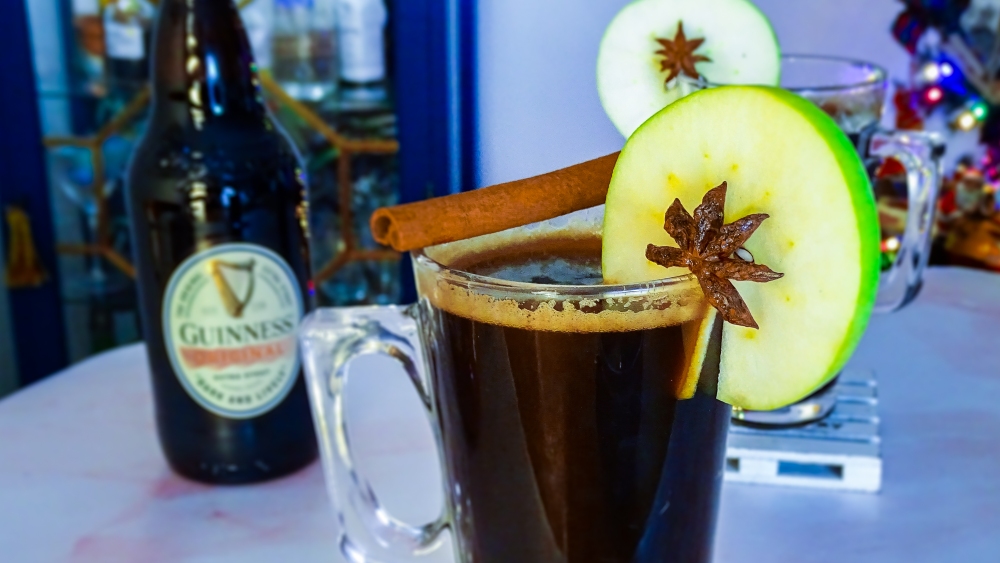 Yep, you read that right.  What started as a joke last weekend while I was on a lovely, wintery pub crawl quickly grew into an idea.  Warm alcohol is such a staple of this season, and feels so wonderfully comforting.  Mulled wine reigned supreme for many years, and mulled cider has made great gains in recent times.  Hot toddies and liquered hot chocolates by a crackling fireside are always a romantic idea.  So why not Guinness?  It was described on this same pub crawl as being “the beer equivalent of gravy,” which while intended as derisive, makes a good point.  It’s rich and bitter, like an aging icon of old Hollywood.  It’s dark and vaguely creamy.  All of these qualities would work brilliantly warmed up!

I researched, and discovered I was not the first to consider this idea, however I felt that this was something I could very much make my own.  Like other recipes I’ve found, I’ve leaned into apple as the diluting ingredient – sweet and seasonal, after all.  However, I couldn’t help but feel that the classic “guinness and black” could also offer something here, with blackcurrant squash (cordial) pairing so well with Guinness, and also working great when warmed.  Finally, in order to amp up the dark, molasses-y quality of the drink, I start with a simple brown sugar caramel.  The vague, almost burnt-butter flavour of this sings through at the end of each sip, though please do be very careful when working with molten sugar – especially if you’ve already had a few drinks!